Ampersand: Grieving From A Widower’s Perspective – When Should a Widower Move Forward & How?

I thought my social connections would be cool with me moving forward in my grief as a widower. I knew there was potential for some kickback on this. But, I was reasonably sure that my social connections, in a way “had my back” in much the way they had supported my family as we went through the cancer journey with my late wife.

Well, when I announced on Facebook that I was “in a Relationship” (after 6 months of dating), I found out the real truth. My grief process didn’t mesh with everyone’s internal expectations or, timeline.  And a (now) former friend decided to let me know right there on Facebook in the middle of all the “happy for you” comments about my new relationship with a really terrific woman. 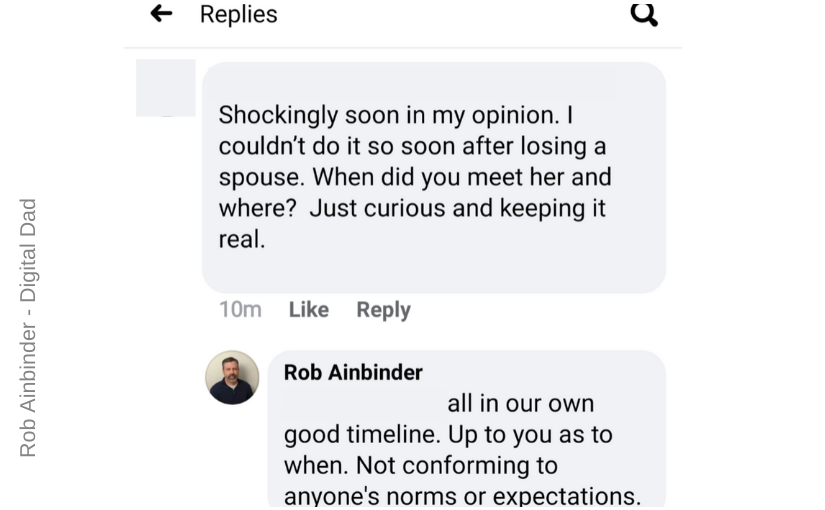 Well, one of the features of these life events on Facebook is they recur in your “Memories” and honestly as happy as 999% of people were for us, I didn’t want anyone raining on our moment. And I certainly didn’t want it to show up in the future in my Facebook Memories.

RELATED  My Wife's GBM Brain Cancer, One Year and One Month Later

This entire event triggered me to lean into a long-held belief, grief is as unique as the individual.

Grief is as Unique as the Individual

In the above example, this selfish former friend thought the world, or more correctly, I.. should conform to their ideal of grieving an “appropriate” amount of time. This is ludicrous and self-centered. No one should attempt to tell someone else how long they should grieve. In fact, in my case, I was grieving from the day of my late wife’s diagnosis! Some friendly advice from a widower, before you publicly criticize their grieving that they “moved forward too fast/move on too fast”. Try talking to them. Make an attempt to understand them from their perspective.

Moving Forward, Not On

Another important distinction that I have made since my late wife passed away is one of moving forward as opposed to moving on. Moving on indicates to me that we are leaving behind the place we were in. When we move forward in grief we have space to carry the memory of the deceased person with us. They are not left behind or forgotten. We can honor their memory and begin to move forward into life. It’s not an either/or situation. It’s an ampersand.

When I hear or read someone is “moving on in grief” as opposed to moving forward, I cringe a bit. I don’t think they are intentionally leaving someone behind unless the circumstances dictated it. I really appreciate the idea that we are moving forward instead.

Have you been criticized for moving forward in your grief “too fast”? Let me know in the comments below.