After playing phone tag with Angela’s Medical Oncologist in Greensboro the previous day, they schedule her for an “urgent” MRI on July 7th. I guess when a recurrent Glioblastoma patient starts having symptoms like missing words, writing small and the like, it gets attention.

As we had so many times before, we prepare for the appointment and the 40-minute drive to Greensboro. At about 30 minutes out Angela takes her Ativan. If you didn’t know Angela, she hates small spaces. And having to have an MRI of her head (again) is wayy down her “best places in America” (or the world) to be.

We arrive at the North Elam Medical Center and head in for the MRI department, as we had two times before. After checking in at the front desk, Angela changes into the required gown and hospital socks. We lock our valuables in a locker. Then walk the 10 or, so steps and enter into the cold, MRI room. Thick glass windows separate us from the techs operating this behemoth. The MRI machine dominates the room. Angela is helped onto the hard, flat table by the techs. They insert a wedge to raise her knees. We both insert earplugs and the “helmet” is lowered on to her head.  I stand beside hear and wait for Ang to be slid halfway down the dimly lit tunnel. Standing next to the opening of the MRI, I reach in to hold her hand while she is in the MRI. I’ve done this for every MRI except her first one in the ER back in November of 2018.

RELATED  Leaving my Infant Daughter Behind for the Day

The sound of the MRI, if you’ve never had one, it’s just like this at FULL volume.

After the MRI accomplishment, we usually celebrate in some way. I also cheer for her out loud at the end of the MRI. Since we are presumably still going to her appointment at Duke, I get a copy of the MRI on DVD. We leave for lunch at the nearby 5 Guys, her choice. No sooner than we order and sit down and the cancer center calls me. Plugging my other ear to hear over the din of the burger joint they tell me, “it’s not good” and that they need to put her on high dose of steroids. The nurse gives us the option to have her admitted or, have the prescription filled.. I can tell my wife knows before I even hang up. I tell her what they tell me. She doesn’t react outwardly instead choosing to focus on the cheeseburger and Cajun fry goodness of Five Guys. But, I know it’s registered with her because it stings inside with me. But, we don’t want to break down into blubbery messes here. We defer until lunch is over for the sanctity of our SUV.
RELATED  Grieving My Wife - The Beginning

After working through what I just heard, we silently agree to defer knowing more. We swing by the outpatient pharmacy to get the prescription filled. 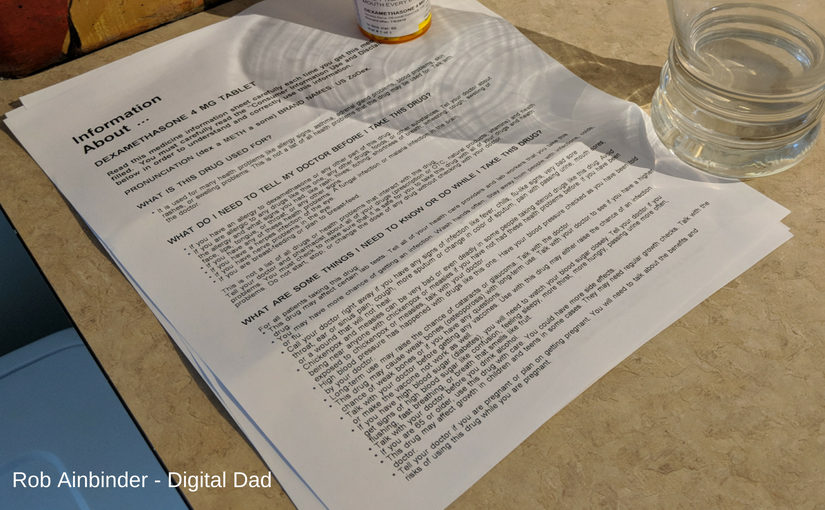 I still had the DVD of the scan and I have to admit it, it was tempting to try to interpret the findings myself. But, I knew from previous scans that would be a mistake. So, the DVD stays in my center console.

We focus on the trip to Carolina Beach that’s been granted to Angela by Fill Your Bucket List Foundation that is starting that Sunday.