A Few Gray Days, Despite the Sunshine (from TMZ to Carboplatin)

This past Monday and Tuesday were tough. Ang had an MRI and follow-up appointment with Dr. Peters at Duke’s Brain Tumor clinic on Monday as part of her on-going care for Glioblastoma multiforme (GBM). This was followed the next day by an appointment with Dr. Gorsuch at Cone Cancer Center.

The MRI (this time) was an early morning (8 AM) appointment at a Duke Regional Hospital location a few minutes from Duke’s Brain Tumor clinic. Ang has only had an MRI at the same place once. All the other MRIs have been at a different imaging centers. So, we’ve not gotten too familiar with any MRI techs. On top of this, the one thing she most liked about an MRI (if you can like anything like this when you are claustrophobic) was the music. Now, apparently, there is no music. For differing reasons at each MRI center. No music. But, with a little help from modern pharmacology and some internal strength from I don’t know where… she gets through the hour-long test with flying colors.

After the MRI we stopped at Chick-fil-A for some breakfast. Even if the politics of owners of the company offend you, it’s one of the best run “fast casual” restaurants we frequent. And a nice respite between the MRI and finding out what it reveals. On this day, they were having fresh flowers delivered for the tables.

The appointment at the Brain Tumor Clinic was full of anticipation and hope. But, when the nurse told us there had been changes and then showed us the scan we were crushed (inwardly). Instead of regression, we were staring at progression.

RELATED  Why is Having an Only Child Awesome? Dads of One Answer

Later, when I reviewed the MRI report, I learned we are monitoring three lesions/tumors on Angela’s brain:

The nurse deferred to the Dr. but, indicated we’d likely be changing medications since the Temodar wasn’t working.

Dr. Peters came in and explained Angela would be switching from TMZ/Temodar to an infusion known as Carboplatin. Carboplatin is a platinum-based chemotherapy that is supposed to kill brain cancer cells.
She explained that they give this chemo to children with Glioblastoma as it is typically an even more aggressive cancer in children. The chemo would be administered at Cone Cancer Center in Greensboro.

We left, in lowered spirits and drove the 60 miles home. While driving we got a call that Dr. Gorsuch wanted to see us the next day at Cone Cancer Center in Greensboro.

The next day, we saw Dr. Gorsuch and she went into great detail about Carboplatin and why it was selected, much more detail actually than Dr. Peters the previous day. She also showed the full menu of what is used as treatments for GBM. We had decided on the way over that we wanted to walk the Healing Gardens at Cone Cancer Center. 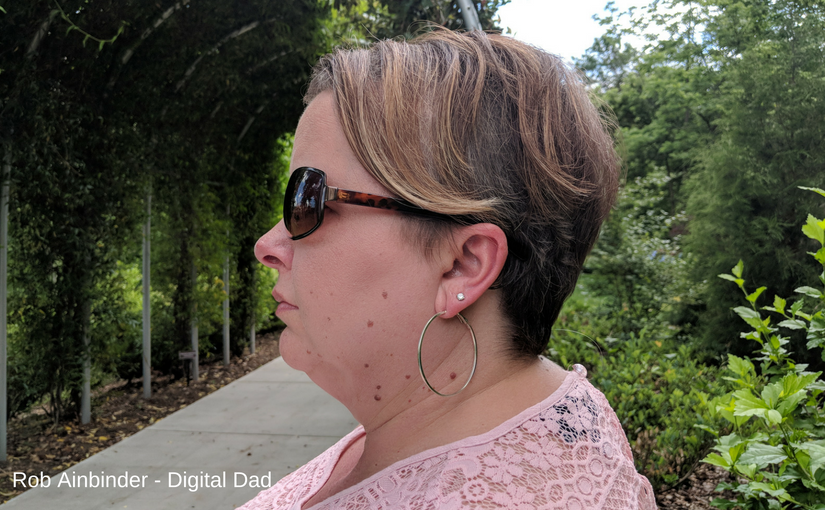 We walked into the garden, then sat on a bench, cried, talked, and cried some more. With her mortality hanging in the balance I can’t imagine exactly everything that’s running through her mind. The reality also sunk in that my wife will be taking a platinum-based chemotherapy infusion because the other chemo isn’t working. Platinum is the same metal as her wedding band.

I did tell her I am grateful for the time we have had and will continue to have. I really, really pray that there is the smallest of miracles and this cancer will be stopped in its tracks with her quality of life preserved.

This cancer is the same one McCain is fighting. I don’t wish this on anyone. My mind is in the present, taking her in as much as possible. I am grateful I can work from home and be with her. But, I am also presented with the stark reality that I could be without her in the future, much sooner than I had hoped/wished/planned. That her treatment options are now being talked about in terms of toxicity versus benefit is indeed a darkness I find hard to accept. It’s so dark, it’s hard to swallow before I start to cry.

These two days were gray despite the sunny 80-degree weather we’ve been having here in North Carolina. Enjoy today, it is the gift. Tomorrow is not guaranteed.

There are Four Ways You Can Help Angela:

1.) Donate to the GoFundMe
https://www.gofundme.com/advocating-angelaainbinder

2.) Sign up for one of several ways to help Angela via SignUp Genius
3.) Follow the story at http://www.teamangela.org
4.) Pray