How We Learned About Angela’s Brain Tumor

A frequently asked question is: “How did you find out about Angela’s brain tumor?” The thing about brain tumors is it can take a little time to show up. It’s not like something you are tested regularly for this type of disease.

We were in the midst of moving into a “new to us house”. Painting cabinets, painting walls, packing to move and moving in. This was all in addition to working our day jobs.

It showed up in the most innocuous way. Angela would miss a word while speaking. We chalked it up to exhaustion from all the house prep, packing and moving. No big deal. She would get better when the moving ended.

From what she and her boss tell me, she was having a fairly regular day at the tile showroom where she works. She went to the back stock area to talk to the warehouse guy and she could not get out the words. Period. Not a single word.

Her boss, who had seen her share of cardiac events thought Angela could be having a cardiac event of her own and wasted no time taking her to the local ER. I got a call from another co-worker that they were going to the ER and I dropped everything to make my way to the ER.

When I arrived, her boss brought me up to speed and left a few minutes later. Angela complained of feeling nauseated so, I asked a nurse for a “comfort bag”. She was asked some standard questions that she couldn’t verbally answer (name, birthday and the like), so I answered for her. Very, very unnerving.

She was asked who her primary physician was, she didn’t remember the physician’s name so, I got her her phone to look up the contact. She had a lot of difficulty scrolling through the contacts. Frustrated, I put her phone away for her. What happened next left me with a memory seared into my brain.

Her upper lip contorted along with her other features of her face in ways I had never seen in all the years we have been together. She grabbed my hand and then when her grip loosened I immediately went to get help. She quickly had a room full of help and I stepped outside the room. They drew the curtain. I had no idea until the doctor told me, it was a seizure. A seizure? How long would it last? Would it affect her permanently? Would she be changed by this? Seeing her have a seizure was shocking. The doctor explained to me these seizures follow a course of intense activity and then, most commonly sleep. When she awoke from her sleep her speaking was much improved. She was whisked off for an MRI.

Ang was medicated so, she was in and out of that most confining of medical devices with ease. After the MRI it seemed like an eternity, the Doctor returned with news.

They found two tumors on the outer surface of her brain. 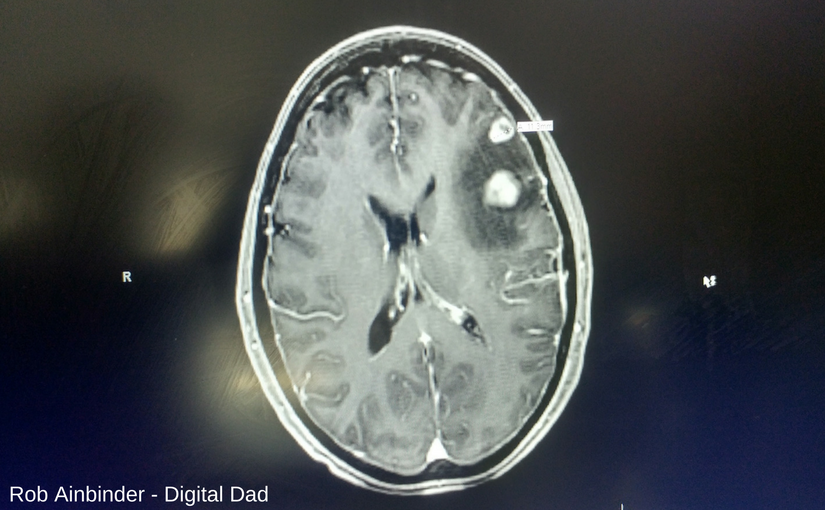 As a self-employed Dad, it’s been tough to provide for my wife’s care and my family’s everyday needs. My step-mother in law has set up a Go Fund Me for Angela. Please share, contribute and/or, pray.

Help support Angela's care for brain tumors. Click To Tweet
PrevPreviousThe Mattress That (Finally) Helped My Wife & I (Plus the Dog)
NextGlioblastoma Multiforme : My Wife’s Brain Cancer Tumor Has a NameNext