Barbeque or, Barbecue it’s All Good (a Personal History)

My love of barbecue came along with the love of my life, my wife. She’s a Texan, and from early in our relationship she expressed a profound love for Texas barbeque. We were in Florida at the time (mid 1990’s), there was no suitable barbeque. There was this one place I would frequent before I met her (mostly for barbeque/grilled chicken) but, when the restaurant did not have brisket or, sausage we found other places to eat. She would describe delicious smoked sausage with just enough “tooth” and the right amount of pepper, beef brisket with a smoke ring and smoky bark and a sauce that magically worked with all of it. I was intrigued by this Texas barbeque thing.

When we lived in Texas, I was able to taste it first hand. It was no wonder my wife was so enamored with it! Anyone who grew up with that tasteless, dry, braised brisket in their house was really missing out on how they cooked brisket in Texas! Holy cow!

When we lived in Texas we ate barbeque most often at:

After some time in Texas we moved to North Carolina and quickly learned about their style of barbeque. This was a disappointment to my Wife who longed for the barbeque of her childhood. For the most part, the North Carolina barbeque we found, didn’t rely on smoke for it’s flavor, rather the sauce. This was a big change for us and we didn’t immediately take to it.

A few years after moving to North Carolina my barbeque education truly began. I searched for information online and had become involved with a very active (at the time) online newsgroup alt.food.barbecue newsgroup. In the group, I met a bunch of dedicated and supportive barbeque cooks, both pro and aspiring. From them I learned barbeque and experienced my first online community. I could ask any question (after I had searched for a similar question) and it was usually answered thoughtfully and thoroughly. Through the group I was pointed to the alt.food.barbeque FAQ. Personal things happened in this group as well, we had a few members die, one got married. We even had vegan trolls try and infiltrate the group and start a flame war against our choice of cooking and protein.

Barbeque Books
Along with the group I either bought or, was gifted the following barbeque books:

My involvement in the group led me to purchase my first barbeque pit.
In mid 2002, I purchased an Oklahoma Joe’s / New Braunfels Silver Smoker  Barbeque pit (since discontinued) and cooked my first brisket “point”.

A Baby Brisket
What news could trump this first cook? Well, as it so happens, we were trying to get pregnant and when my wife came downstairs she had big news… we were pregnant! That became quite a celebration, we had a baby brisket on the way! And my first brisket to celebrate!

And so began my barbeque cooking education. Time, smoke, wood, hardwood charcoal and temperature all played a role.

Also in 2005, I made modifications to the pit. This made the cooking grates more stable.I also extended the smoke stack to help with circulation and added a deflector where the firebox joins the cooking chamber to help with heat distribution.

And the more you cook, the better you get. By 2009, I was getting some solid footing. The big thing I learned was “it’s done when it’s done“.

2014 The End of a Chapter, the Start of Another

2014 saw many changes. For one we left Texas and moved back to North Carolina. Along with this was the decision to not take my first pit back with us.
It had served me well, we simply didn’t have room for it. And it’s degrading condition had led me to question it’s longevity. I’m not sure they designed these bolt together pits to last 10 + years. Time for one more cook before we hit the road. I did wind up giving the pit to a neighbor who was excited to receive it.

In 2016, I returned to cooking outdoors. Eventually, succumbing to the outdoor cooking bug, I bought a grill on clearance at WalMart. It wasn’t a barbecue pit by a long shot but, I could simulate a pit (to a degree) in a new my charcoal kettle grill. 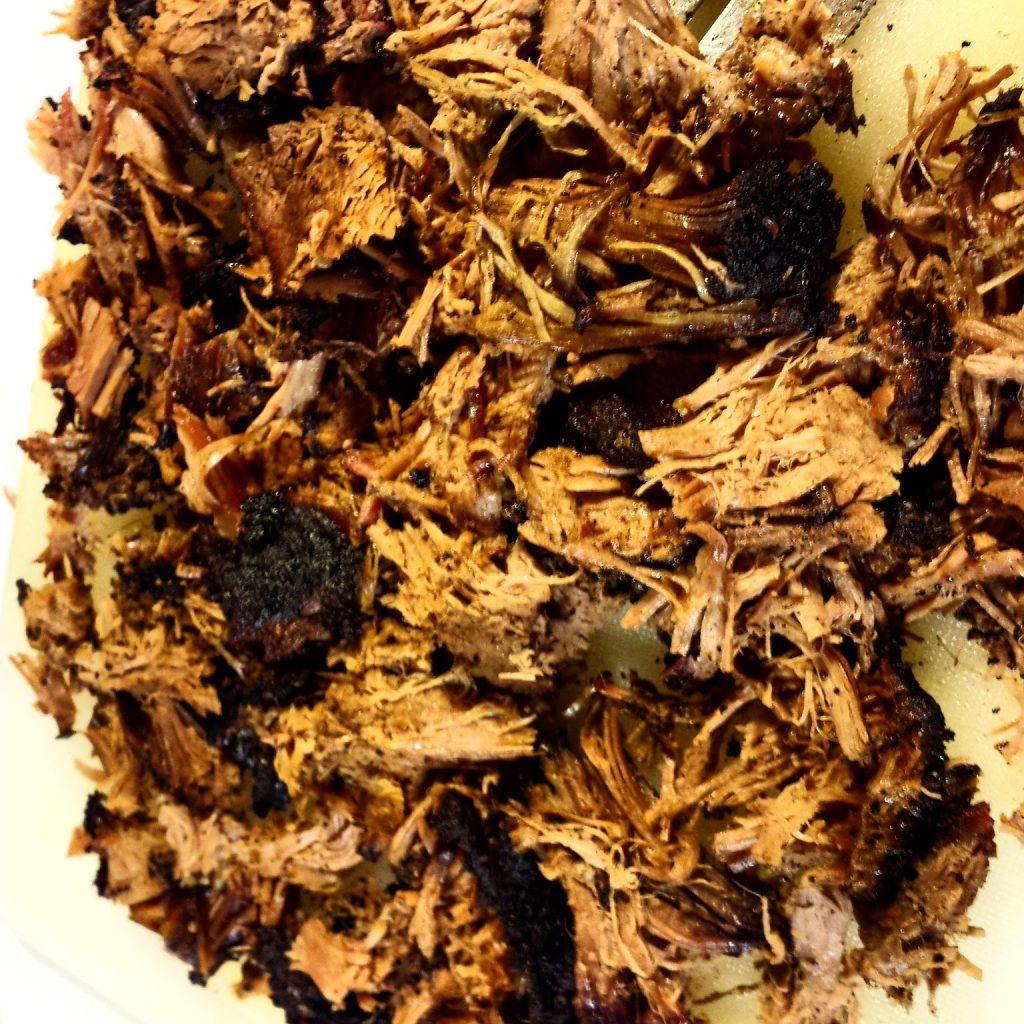 I’ve learned a lot in my pursuit of barbeque nirvana. Most significantly, nothing can replace time. The right amount of time ensures a good cook and a good result.