An Austin Getaway for Parents (Part 1)

As parents we often put ourselves last behind our children and other trappings of adulthood but, if we are to live a life fully filled shouldn’t there be time for us?

I feel that one of the keys to our personal success as a couple has been to carve out time for each other. Whether it’s an overnight trip, weekend trip or, something like a staycation we’ve made time for us a priority.

When my wife told me that her lifelong friend in Austin was celebrating 25 years of marriage we immediately realized it was a twofold opportunity. One, to celebrate with the couple on this massive milestone and the other, for us to explore some of the things that Austin has to offer. We checked: the calendar, with the inlaws, and booked our flight. Follow along as we highlight some of the great things to do on a parent’s getaway to Austin, TX.

We live some distance from the nearest, full carrier airport. Sure, we have an airport but, not the choice of airline. And with a very, very, early departure, we weighed all sorts of options heavily. In the course of researching, my wife found a “Sleep & Fly” option that seemed just perfect for us! The basics of this deal are that you sleep at a hotel and pay for parking at the hotel for your entire trip. The hotel provides a shuttle to and from the airport. Considering we’d get a few more hours of sleep it seemed worth it and we’d recommend it to parents considering a getaway.

Surprisingly, our shuttle from the hotel to the airport was packed! Even at this inhumane hour of 4:30 AM. We breezed through airport check-in, security and other pre-flight stuff.. who really wants to fly this early anyway?

We boarded our flight from RDU to HOU and settled in for the first leg of our trip. The flight was uneventful and we made good time in the air. Arriving in Houston we grabbed some of  our favorite breakfast tacos in the whole world from Pappasito’s (yum) and some Peet’s Coffee & Tea black tea. It was soon time to board the flight from Houston to Austin.

We Arrive in Austin, Salt Lick Barbeque and The Broken Spoke

Despite living in Houston during two periods in our life together, we’ve only managed to visit Austin once. We were in for quite a treat this time.

Arriving in Austin, it feels different from other cities. Maybe it was the guitar sculptures, Salt Lick barbeque stand in the airport. Or, maybe it was just something in the air that told us, this is Austin.

Our first night was spent in a modest hotel. The most important things were we were here to celebrate our friend’s 25th wedding anniversary. First, a stop to the Salt Lick Barbeque and then, on to the oldest honky tonk in the country, The Broken Spoke. 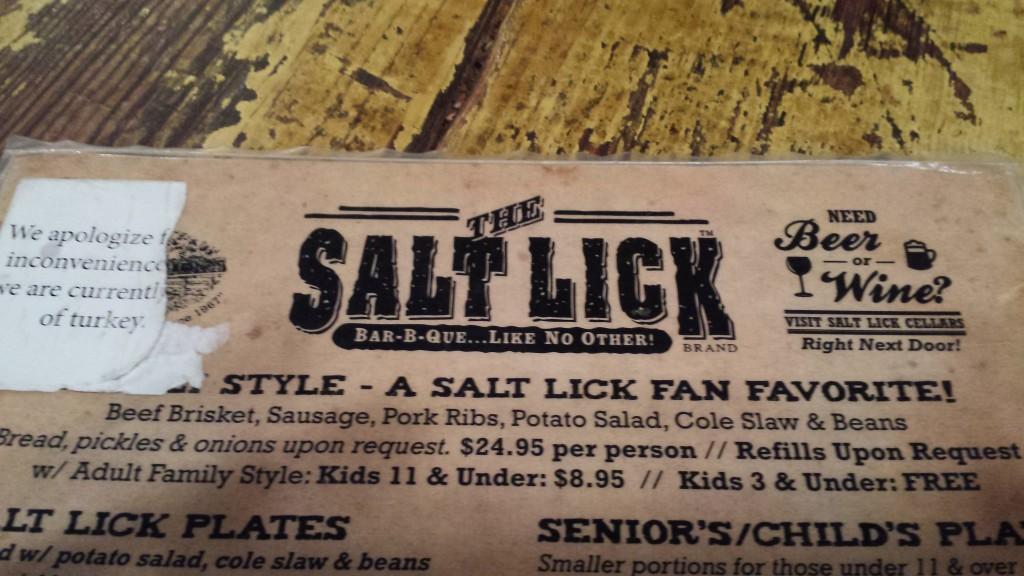 The Salt Lick is simply amazing. With family roots going back to the 1800’s, they really seem to care and it shows. At 3 PM in the afternoon, the place was jumping. Smoke was pouring out from the pits. The parking lot was packed and as we approached the restaurant there was a line! The last time with visited the Salt Lick (in the 90’s) it was one building. And man has it ever grown. Now there were two, plus a winery!

We chose to eat family style ($24.95/person) and was it ever worth it. The brisket was tender, juicy and just the right amount of smoke. The pork ribs were tender with just a bit of tooth. The rub on the ribs had a bit of sweetness to it that made them even more enjoyable. The beans, pickles, onions and slaw were all great accompaniments. The waitress kept it all flowing and encouraged us to empty the serving plate for more. And we definitely ate our share of all of it. I was so full that I passed on the cobbler and I was glad I skipped the bread which was served first. Really great food and awesome company. If you don’t walk out of Salt Lick full it’s your own fault. 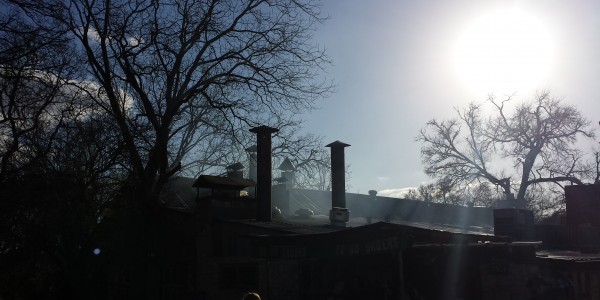 Smoke from the pit over the original Salt Lick building 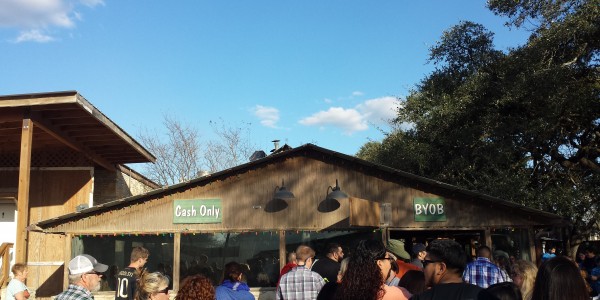 One of the newer buildings at the Salt Lick 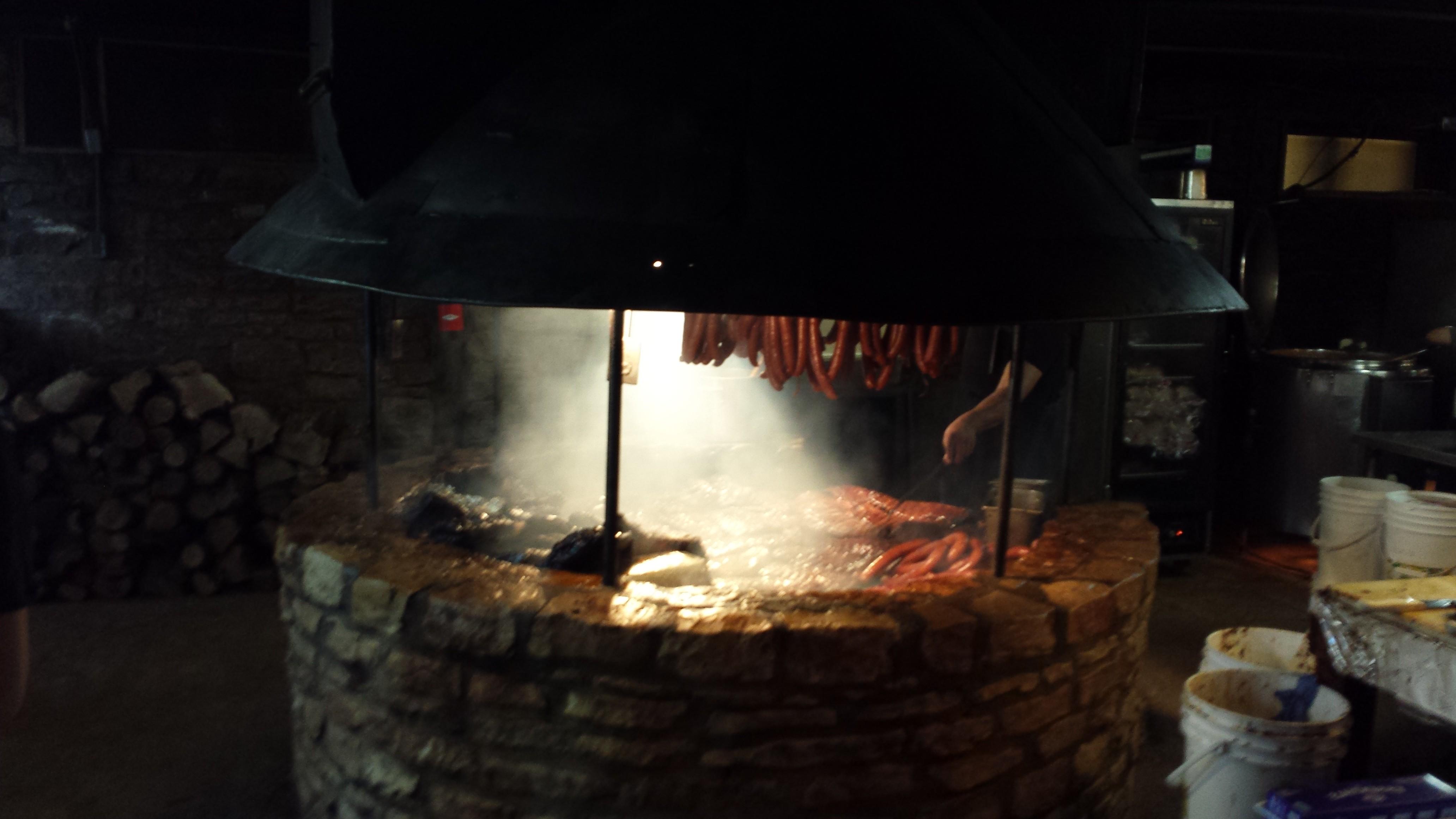 The pit inside the original Salt Lick building. Yum 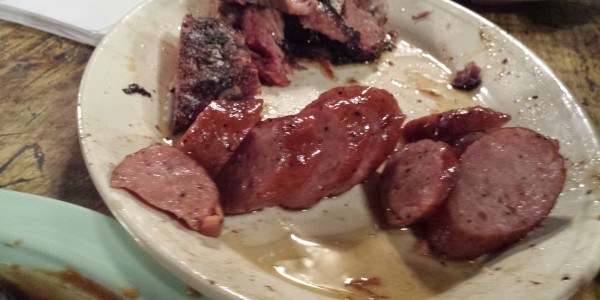 Some of the good stuff, brisket (background), sausage (foreground) 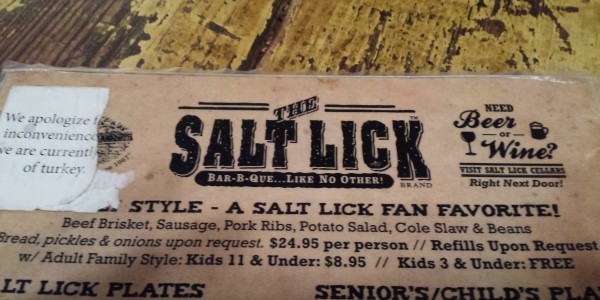 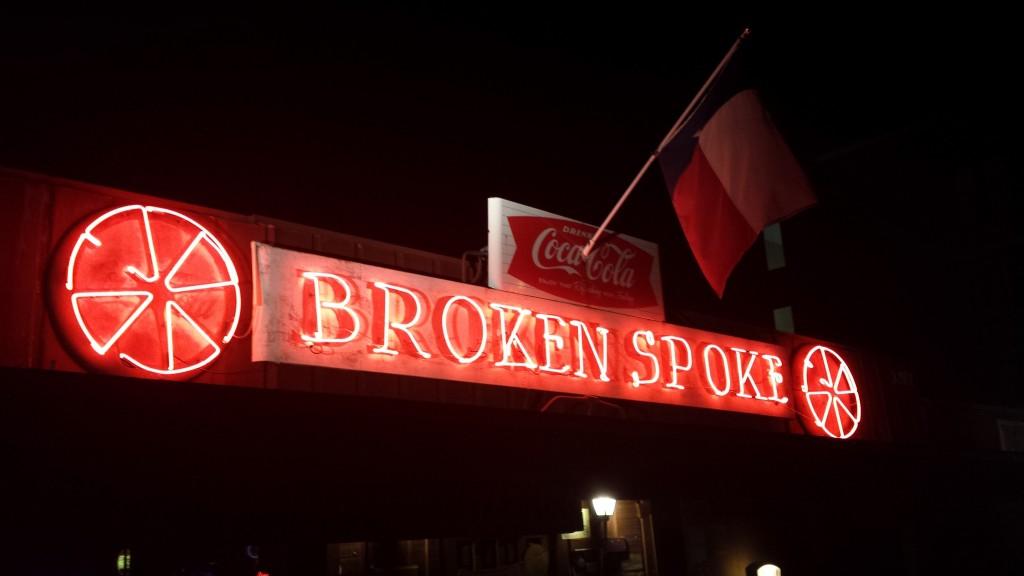 The Broken Spoke, stepping inside was like stepping back in time. The kitsch factor was pretty high at this dancehall. This was my first experience at a dancehall. And it was an eye-opener! Apparently, the joint opened in 1964 and hasn’t changed much since then. They offer dance lessons most nights. If you look at a street view you’ll see how dedicated they are to staying open and preserving their business. Condos have sprung up all around!

RELATED  Barbeque or, Barbecue it's All Good (a Personal History)

We joined in celebrating our friends anniversary at some reserved tables and the libations flowed late into the evening. I still don’t know a two-step from a waltz. But, that’s all my fault. 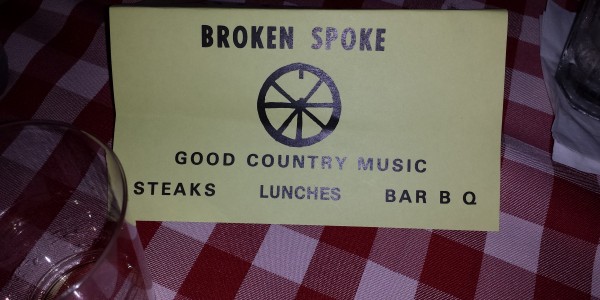 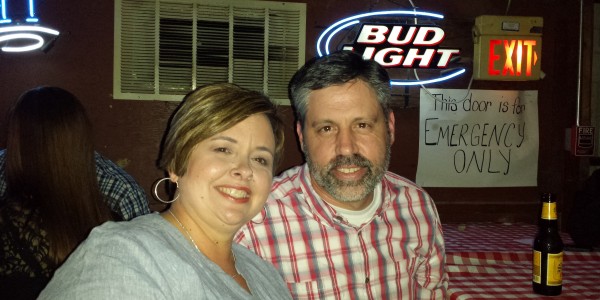 Having a great time at the Broken Spoke. 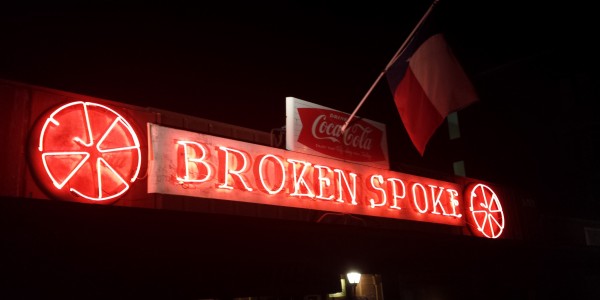 In part two, we’ll dive into some other fun stops and our accommodations for the rest of our trip. Read Part 2 of our Parent’s Getaway to Austin, TX